»GOOOOAAAALLLL: Medford United Comes to the Field to Play Futbol

GOOOOAAAALLLL: Medford United Comes to the Field to Play Futbol 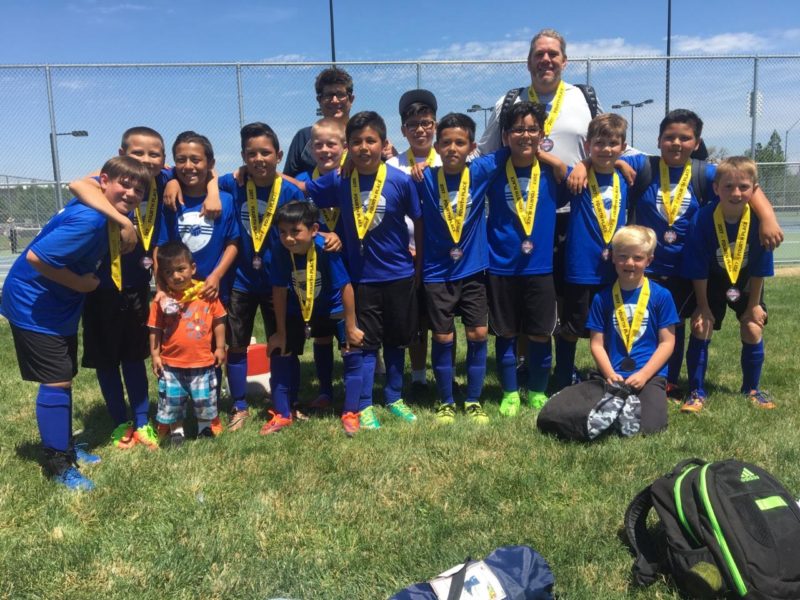 The competitive American youth soccer world—from elite hotbeds like Southern California or North Texas; to their imitators in every major US city’s suburbs; and even to Southern Oregon—is a feverish one. Endless tournaments. Battling governing bodies. Corporate sponsorships. Six-figure salaries at stake. Yet, despite the tumult, an informal consensus reigns.

For those American families comfortable enough to afford to pay for competitive (or club) soccer, which, at the low end, runs several hundred dollars a season, and at the upper end, several thousand, experts have persuaded parents in the merit of more training, more instruction, and more competition. Clubs pull the youngest children in with camps and “development” programs and then send most of them away by age twelve when they are deemed not to have potential. When Bayern Munich (the leading professional soccer club in Germany) opened its $83 million dollar youth academy “campus” this summer, youth soccer gurus both trembled at the new standard and nodded their heads in agreement. More is better.

Even though Munich is 9000 kilometers away from Medford, aftershocks from the Bayern earthquake will reach the Rogue Valley. The Portland Timbers, one of three Pacific Northwest professional soccer teams in North America’s top league have an outpost of their youth academy program in Southern Oregon. Professional soccer/football is a global business, and the urgency to imitate and necessity to compete are fierce: more facilities, more staff, more structure.

“The pay-to-play model,” says Dave Kaufman, founder of Medford United Futbol Club, “leads to an elitist sport.” After being part of the first generation introduced to soccer in Southern Oregon by local legend Aksel Andersen and going on to play at Sonoma State and have a brief professional career in the early ‘90s, Kaufman well knows the difficulty of maintaining a viable sports environment far from sprawling suburbs. Add the financial hurdle which many children in the Rogue Valley’s Latino community face, and getting cut from a club team is a moot point. Kaufman created Medford United in 2011 to eliminate both obstacles.

The newish club grew out of Kaufman and Eagle Point High School coach Matthew Sober’s “Soccer in Schools” program. Moving from one Title I elementary school to the next, the two would run mini-soccer games and throw in a few skill exercises during recess. The students loved the chance to play soccer/futbol, obviously a favorite in Latin culture, and teachers and administrators loved the positive changes in student attitudes and performance. When the program had one especially talented participant, Medford United’s founding gave him the chance to excel beyond the playground.

Medford United now includes boys teams from ages ten to sixteen. All volunteer coaches eliminate one major expense associated with club soccer. Donations help cover administrative costs and provide equipment. The club holds practices twice a week, and, given transportation and communication challenges, accepts that some practices might have a handful of players, and others dozens. Medford United’s low-budget by necessity approach provides cover for the club to escape the “more, more, more” consensus in other ways, too.

“Our whole approach is, let them dribble,” says Kaufman. Contrary to a coach-directed, tactically-oriented, and highly structured practice, Medford United basically lets its members play, express themselves, and learn through experience. Pick-up-soccer, where most kids around the world learn the game, is the model for a Medford United practice. Mixed age groups set up a couple of goals and go—make mistakes, try new moves, and enjoy themselves. The adults monitor only.

Another notable difference–Medford United is not selective. “In many cases,” Kaufman says, “kids have a passion for a sport (regardless of ability). The quickest way to take that joy away is to not include them on a specific team.” He continues, “we are trying to give kids a platform where they can succeed.” In Medford United’s case, more kids playing longer, having more fun, and (as Kaufman notes), demonstrating more ability by 10th grade, is the worthwhile “more.” Viva United!

One World Futbol Ensures Everyone Can Play